The following is -sadly- only for people able to read german, but the book „Salz in der Suppe“ about Dieter Koslar, written by him -posthum-and his son is so unique, that I have to tell you about it anyway:

Dieter Koslar was an amateur racing cyclist from Cologne and it is fair to say, that he was very successful. After hanging up his wheels, he ran the cycling program of the local sport club, the PSV Köln, went on to direct and coach many german national champions and found the first professional cycling team in Cologne, Team Gerolsteiner. After his death the cycling team, then called Team Cologne, ended, too.

First up I have to confess: I am not sure if I like the book. But I am very, very glad I’ve read it. I have a rule about books: Every book gets a chance, but only for the first two chapters. If I am not curious for the third chapter, I stop reading the book, because I don’t ever want to feel obliged to read a book. This one made the cut, but it was very, very close!

I am in 4 different minds about it: 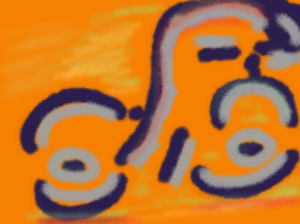 But what I really like about the book is that nothing is served to the reader. Big things come in plain, unimposing sentences and you actually have to think about the writing and the writer. It is even more, at times it is uncomfortable, because the book forces you to stop and think about the meaning of this roughness. It presents evidence and leaves the evaluating of the evidence to the reader.

The book offers you nothing, if you want something, you have to work for it and actually engage with it. And through that it achieves something no other biography has done for me in a long time: The person becomes real.

Who is in control? Reader or writer?

At the end of the book I had a very clear and distinct feeling of Dieter Koslar as a real living being and not just as a subject of a book. I think this is very powerful, although hard to achieve, because it is a very human desire to look pleasant, to be liked, to make ourselves understood. To forego this, to give the control up to the reader is a difficult task. But one that was achieved by the author, as far as I am concerned.

I got away with the picture of a complicated, driven person, a person not easy to like. Someone who was aware of this, tried to change it and often came up short. Of course, from the point of view of a publishing firm, this isn’t a very desirable way to write a book, because it can happen, that in the end we readers don’t like the person that emerges in front of our inner eyes. Probably not so good for selling the book, which opens up a whole slippery slope of „How real or true are the pictures we get shown in biographies, when the publisher knows, that his income is probably served better, when the subject of a bio-pic is sympathetic?“

But used by someone who’s attempted achievement it is to bring a character close to the audience, to leave a legacy of a life behind, this is a powerful, engaging way to bring a human being (back) to life.

There are tiny sentences that radiate strength: When Dieter Koslar already was deep into his fight with cancer, he answers to the question what gave him strength to live so long with the illness: Cycling.

And it is said as a simple fact, with firmness, grace, passion and a sense of reality. It is the truth of a life and not cheesy at all. I was really moved by it. This is someone who has found his passion and in the end it doesn’t matter if he is passionate about stamps or about all that comes with riding a bike. Maybe you have to be singleminded and obsessed to achieve something lasting in life? Maybe this kind of passion always is a bottomless pit, swallowing up everything else-in his case his wife, his son, his life? Maybe there is no in between, no moderation possible, if you want to move the world? Real passion-as everything else in life-comes with a pricetag.

The book also manages to make it very obvious what sets cycling apart from many others, more social sports: When Koslar talks about the year 1968 for example: The whole society, the political world changed in 1968, without him even noticing it. This describes nicely the singlemindedness, the obsessive blindness you got to have for cycling and probably for other endurance sports, which walk the line so closely, too. You miss out on many things. You miss out on most things. His little world, the cycling world, brushed the bigger picture easily aside.

And of course he asks himself the eternal question: Why?
Why every day the sacrifices, the pain? Why getting up and back on the bike again after crashes, why find the courage inside for the next fight to find sponsors for his team? Why summoning once more the strength to fight and argue with the local  politicians and authorities to put races on the street?

And he comes up with real and honest answers: Riding to him meant riding away from an alcoholic, mentally and physical abusive father. It was giving him purpose and worth. A place in life. He could be someone. Someone others looked up to. But most of all he could escape on his bike. And he describes the gripping addiction after conquering your pain, the strange, newborn joy after riding your inner slate clean, anihilating yourself, in the long hours you are alone with your bike, the movement and the road.

As said above, this biography managed for me, what books, where everything is spelled out, where every action is first reported, then commented on, then judged and at last put in proper context for the reader, can so often not achieve: Dieter Koslar became real to me. As a reader you have to invest in the book, in the story, in the life of Dieter Koslar. And somehow, through the input of our own thoughts and feelings into the book, which therefore exists of two ingredients – the book and the reader – a real life emerges. And that’s why all in all, I am very happy the book exists.

And I think Dieter Koslar would have liked that I don’t know if I really „like“ the book, but that I respect it and it made me work and that I, sometimes grudgingly, have to give him respect. Because that is one answer to the question „What for?“ „For respect“.

On a personal note: Because so much of this particular reading experience is our own perspective, I am very sure that this is a book about which people will have totally different opinions. So I can’t guarantee that you will see even the tiniest bit of what I saw.