As always a warning: This piece contains very expressive language and thoughts!

The „How it began“ part
Ok. This happened: With ScHoolboy Q I usually have my troubles. I think he is massively talented and on every record he has a few joints blowing me away, but there are also the ones I think are totally boring and uninteresting. Once you heard how cool he thinks himself and how he fucks with this or that woman and he finds no new ways to see, feel, say this, it gets absolutely pointless. Which is a shame, because musically he is really good and tries new ways. So all this combined to me putting off listening to „Blank Face“ for some time.

Then I listened to „New English“ by Desiigner – to be precise I did not listen to it as a whole as it was not convincing me of anything. So I was prepared to listen to music – and had none to listen to! In an act of quasi selfdefense I sighed and began listening to „Blank Face“. And it was delirious!!! (I tweeted some parts of this experience. My Twitter account is a solely for cycling, so this came out of the blue and totally unconnected for my cycling-buddies, who must have thought I have gone crazy!).

Yes, admittedly „Blank Face“ still has those – to me – uninspired moments, but they are rare. The majority of the record is urgent, raw, making the step further that was missing before. It is – as TDE usually does it these days – not really a HipHop record, it is a Rap record. I mean with that, that it has almost no HipHop beats, instead it is the singing-technique Rap used to music. This is good and bad. It is good that an artist does not confine himself to one kind of music and it is bad, if you lust for the mindnumbing bassbangers of the old days like I do once in a while.

The „The list“ part
I won’t go into every song of „Blank Face“, I’m no music critic, just a lover of music and life But I will do my list – and remember these are no neutral views, these are my very own thoughts and feelings:

Favourite song:
„Lord have mercy“ – like I tweeted to my innocent and undeserving cycling-co-tweeters this song takes me to another place in space and time. Followed very, very closely by „Neva CHange“ and „Johnny Muir“

Theme of the album:
„I trade the noise for a piece of divine“ from the song „TorcH“

Most important song on the album
„Black Thoughts“

Bar of the album:
„I’m a gangbanger, deadbeat father and drug dealer“ from „Lord have mercy“
The reason for that? It is no specially artistic bar, but it is honest. Clear. It sets the tone, a lyrical Exit-sign: Here it is, if you don’t want it or can’t take it, you can leave, but don’t cry „Foul“ at the end of the ride – you knew exactly what you got yourself into

Words that bring tears to my eyes:
From the song „Black THoughts“
„Pissy sofas, sharin food with roaches, on gangsta Crip
my poppa was a bitch, left me where hope just don’t exist“

Favourite feature:
Yes, Ye is on this record and he is more than alright, as is SZA who is as sweet and lovely as ever. We got Miguel who lost nothing of his sexy and Justine Skye is a very, very hot surprise and I can’t wait to listen to more from her, but what breaks my heart is listening to Anderson .Paak. When he sings „If I never make it to 25, I still will fly“ – man, chills all over my body

Best thing of the album:
It gets better with every listen. Word!

Funny thing on the album:
Hearing Kendrick Lamar appearing in the chorus of „Overtime“ rapping/singing enthusiastically the two words „right now“ in the line „I wanna fuck you right now“. For some reason this is hilarious to me

The „Two short, unconnected thoughts“ Part
First: Impressive how every member of TDE changed their avi on Twitter to the Blank Face cover. A concerted action. The cover is cool, too. And has a lot in it to decode. It seems to be a normal tree, but through the reddening of the picture it also looks like arteries. You see a person with a white mask. The colours of the cover all have a meaning (is my opinion).

Second: I have a theory that goes -put simplistic – like this: Songs exists of two sides, the musical and the lyrical side and musicians for me often have one side that is natural to them, that drives the other. One side that is their natural instrument to express themselves: Some feel and see the music first and then put the words to it, but driving the song and their artistic process is the music. Others have the lyrical vision and the words to translate themselves to others and then they add music to these words. There also is a third, very rare kind: These are the musicians who have both abilities at equal amount. Kendrick Lamar would fall for me into that category, as would Drake. But they are rare exceptions. The majority of musicmakers have – to me – one thing that is coming more natural for them, either the music or the words.

I feel ScHoolboy Q’s natural habitat is the music, while for example Ab-Soul is for me a perfect example of an artist whose natural way to express himself are words. Don’t get me wrong, I am not saying they are not good at both, just that it feels to me that one, either the lyrical or the musical side, often is the prevalent, the driving part in their art.


The „All in All“ part
No, „Blank Face“ is no masterpiece, no stroke of a genius, but it doesn’t need to be. Genius and masterpieces are rare and that is a good thing. No, „Blank Face“ is a good to very good record, with a minority of to me uninteresting songs, many songs that make me move, think and sing along and a couple of songs that touch, teach and reach me. It is no HipHop record, it is a Rap album and one of the records to stay permanently on my Ipad (which is a seal of approval in my private musicworld).

Of course, like so many Rap and HipHop records, „Blank Face“ is also a strong statement, a mighty picture of how it is to live a life in the USA. A country that seems to be in a hidden civil war with it’s own people for years. Many records these days contain warnings, that the patience is thin, that it will come to bloody riots (notably „To pimp a butterfly“ by Kendrick Lamar). But nobody seems to listen. And honestly, so much injustice and wrong has happened, the realities are so different, the trench so wide, I fear the conflict is unconsolable. One thing I know for sure is, that walking further down this road, acting like there is equality, when there is none, acting like everybody has the same rights, the same power, while it isn’t this way, will only fuel the fire and lead to further injustice and to ever more violence.

Oh and if we are at TDE right now, here’s a heartfelt P.S.:
Please, please, pretty please Isaiah Rashad give us some new music. Please. We hunger for it, we need it! Urgently! 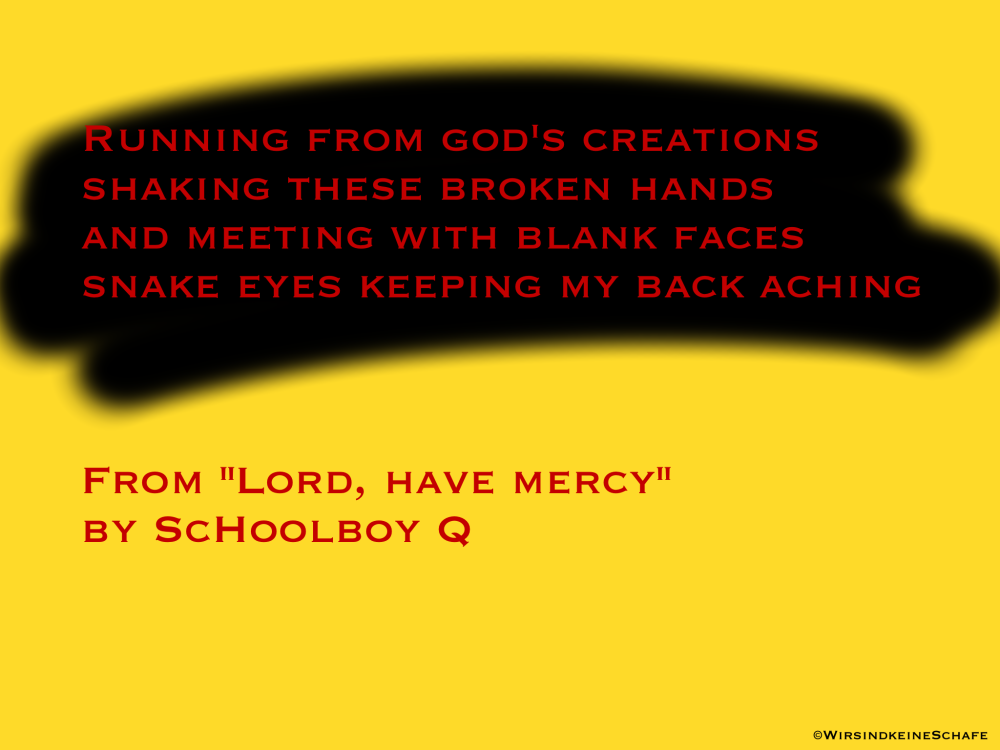 You may be asking yourself „What did happen to New English?“ Poor thing got deleted! Life sucks, Desiigner, I know! Sorry!